I was on the dance floor, having repeated the steps half a hundred times. The beautiful woman opposite me was still smiling, but it wasn’t just my imagination: the corners of her mouth had started to turn up into a sneer. The teacher to my side, said “No, like this!” and demonstrated one more time. It was a simple dance movement, a Swing dance step that thousands of people know by heart. I tried, and failed – again. I just couldn’t get it.

I went to bathroom to splash some water on my face. I had come out to try a new type of dance as a fun experiment, and here I was stressed out and making zero progress. 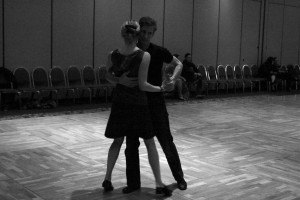 As I stood facing the mirror, I thought for a moment about practice. I imagined all the times I had failed to learn to flip. And those times attempting the gymnastics giants when I had fallen on my head. The frustration of doing tango poorly in Argentina or of feeling out of place practicing Brazilian Jiu-Jitsu. In that moment, something gelled and I realized that most of what we know about practice is wrong.

Here are some of the ways that my practice was actually making me worse: